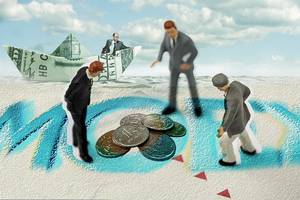 Trading on the foreign exchange market today took place with very low volatility. During the trading session, the ruble weakened against the dollar by 0.3%, closing the day at around 63.6 rubles. per dollar.

At the same time, it should be noted that despite such a slight movement, the trading volumes were at the level of the previous days. This indicates that there is a demand for foreign currency. It is too early to say that the real economy needed dollars and euros (this could mean the beginning of its recovery). It is possible that speculators simply fixed profits from the growth of the ruble in the previous days, and large investors invested part of their capital in the dollar, realizing that the ruble cannot strengthen indefinitely.

Meanwhile, fundamental factors speak in favor of the continued growth of the Russian currency in the foreseeable future.

“A positive for ruble assets is the inability of the EU members to make a decision to ban oil supplies from Russia. At the same time, despite such a negative for oil prices, they not only do not decrease, but also maintain an upward trend,” — notes Dmitry Babin from BCS World of Investments.

To this we should add such a fundamental driver as the state of the current account of the balance of payments of the Russian Federation. According to the Bank of Russia, the current account in January-April amounted to $95.8 billion, including in April — $68.3 billion. This indicates a huge excess of foreign exchange inflows over demand, and this situation is unlikely to change radically in May.

Therefore, after a not very long consolidation in these prices, the ruble will most likely continue to strengthen towards the nearest technical target of 58 rubles. per dollar.


Ruble assets will be supported by the situation on the energy market. Despite the fact that the European Union could not agree on the refusal to purchase Russian oil, the quotes of “black gold” do not even think of falling, testing the resistance of $115 per barrel. Western media report almost “caravans” of tankers with Russian oil heading to the Asian region.

It seems that the issue of paying for gas by “unfriendly countries” in rubles has also been resolved: only a few large consumers have abandoned this scheme.

Thus, proceeds from the sale of new volumes of oil and gas can be expected to enter the Moscow Exchange in the near future.


The Russian stock market rose by 2.5%, not reaching the strong technical resistance of 2450 points, only 25.

Among the highly liquid stocks, the papers of Gazprom stood out, having grown by 6%. Traders are waiting for the Russian government, as the main shareholder of Gazprom, to decide on the payment of dividends for last year, despite the fact that foreign shareholders will not be able to withdraw their dividends to their homeland. Under such a scenario, the dividend yield on the shares of the gas monopoly will be slightly less than 20%, and this is not an annual percentage – the dividends will go to investors’ accounts within a few months.

In addition, at the end of May “Gazprom” should publish statements for the first quarter. Some analysts do not rule out that the company’s revenue for this period will exceed the result of the entire last year by 1.5-2 times. With such expectations, Gazprom shares should be kept in portfolios.

As we predicted, Rosneft outperformed the market today, gaining 4.2%. Among oil companies, this paper is the most preferred due to more than twofold fundamental undervaluation of the issuer, as well as due to the fact that a significant part of the company’s deliveries is oriented to the east.


Sberbank’s shares rose by 3.5%. It is difficult to recommend including these securities in medium-term portfolios: most likely, at the end of the year, the bank will show a multiple decrease in profits.

Slightly less liquid preferred shares of Surgutneftegaz soared by 7.8%. The company is also expected to traditionally generous distribution of last year’s profits. However, there is a high probability that, as in Lukoil, the management of Surgutneftegaz will decide to postpone this issue so as not to infringe on the rights of its foreign shareholders.

In general, the Moscow Exchange Index is close to the technical resistance of 2450 points, fixing above which will allow us to talk about the beginning of an uptrend. But the stock market looks locally overbought, so the desire to take profits will increase.

Perhaps the fate of the market until the end of May will be determined tomorrow.