Scientists who arrived in the Arctic on the ice-resistant self-propelled platform (LSP) “North Pole” set up a scientific camp. It took them about a month to equip laboratories and test sites, and start implementing observation programs. 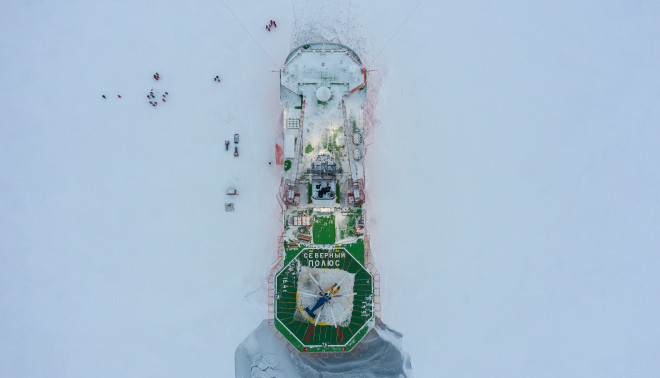 Photo: Press Service of the Ministry of Natural Resources of Russia

The scientific camp is located 500 meters from the ice-resistant platform “North Pole” and includes easily erected geophysical, ice research, meteorological houses – laboratories, an oceanographic terminal, a magnetic pavilion, a workshop, and the Toros test site. Scientists work both in the ice science camp and in the laboratories on board the ship. The expedition program includes more than 50 types of research and observations aimed at a comprehensive study of the natural environment of the Arctic, the patterns and causes of changes in the climate system, and the biodiversity of the Arctic region.

– The obtained data will allow us to describe possible climate transformations in the coming decades. The data will also be used to ensure safe navigation along the Northern Sea Route, the implementation of major infrastructure projects and obtaining new information to substantiate the application of the Russian Federation to expand the boundaries of the continental shelf in the Arctic Ocean,” said Alexander Makarov, director of the Arctic and Antarctic Research Institute.

He noted that the new format of organizing work – with the support of an ice-resistant platform, which has become a cozy and safe home for polar explorers – has been demonstrating its effectiveness literally from the first stages of the expedition.

– It took no more than a month to equip the scientific camp. In the near future, a garage for equipment maintenance will be erected in the camp, and the deployment of a unique measuring system aimed at studying large-scale fluctuations in the ice cover and its response to atmospheric disturbances will continue. In January, the construction of the runway will begin, – added Alexander Makarov.

During the first month of operation of the drifting station, scientists launched a deep-sea oceanographic complex and began regular sounding of the water column of the Arctic Ocean. Analysis of soil and water samples has begun to assess the overall change in species composition, quantitative parameters of phytoplankton, zooplankton and benthos.

A large amount of work is carried out by ice explorers. The morphometric, mechanical and strength properties of ice are studied. A survey of the lower surface of the ice was carried out using a sonar. A spatially distributed network of hydrometeorological observations has been deployed within the 16-kilometer experimental range on ice.

Earlier it was reported that the expedition “North Pole-41” became a continuation of the domestic program of drifting stations, which began in 1937 with the expedition led by Ivan Papanin. In 2013, the program had to be curtailed due to the melting of ice in the Arctic. Specialists of the Arctic and Antarctic Research Institute analyzed and summarized the unique experience of previous expeditions and found the best option for long-term basing of research laboratories – the ice self-propelled platform “North Pole” – a ship that has no analogues in the world.

The start of the expedition “North Pole-41” was given on September 15, 2022 in Murmansk. During the first month, the station on the ice floe covered more than 400 kilometers. The opening of the station took place on October 2. Earlier, Minister of Natural Resources and Ecology Alexander Kozlov, during a report on the work of the LSP to Vladimir Putin, said that it was still difficult to say how long the expedition would last.

“Everything will depend on the melting of ice fields with which the platform is drifting, trajectories and speeds that cannot be predicted with absolute certainty,” said the head of the Russian Ministry of Natural Resources.