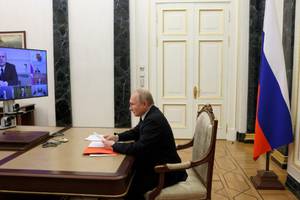 The blame for the global consequences of anti-Russian sanctions lies with Western countries.

This was stated by Russian President Vladimir Putin at a meeting on economic issues, the Kremlin press service reports.

He pointed out that some States already had to face the risks of famine. “The blame for this lies entirely with the elites of Western countries, who are ready to sacrifice the rest of the world in order to maintain their global dominance,” the president said, noting that Russia is confidently coping with external challenges.

According to Putin, sanctions against the Russian Federation hit the economies of countries that impose them. In addition, restrictions provoke a global crisis, the head of state stressed.

“These sanctions largely provoke the global crisis. Their authors, guided by short-sighted, inflated political ambitions, Russophobia, to a greater extent hit their own national interests, their own economies, the well-being of their citizens, ”the Russian leader said. In his opinion, the continuation of such a policy will lead to the most complex and difficult to reverse consequences for the European Union and the world’s poorest countries.

“Obviously, due to objective economic laws, the continuation of the sanctions obsession, if I may say so, will inevitably lead to the most complex, difficult to reverse consequences for the European Union, for its citizens, as well as for the poorest states,” Vladimir Putin said.

The President noted that Russia expects a record harvest this year. He clarified that we are talking about 130 million tons of grain, including 87 million tons of wheat. “If this happens, and we will rely on this, then this will become a record in the entire history of Russia. This will allow not only to meet domestic needs with a margin, but also to increase supplies to the global market for our partners,” Putin said, adding that this is “very important for world food markets.”

Formerly “Expert” wrote aboutthat restrictions on Russian supplies of mineral fertilizers have a negative impact on the food security of the EU countries. At the same time, domestic producers find alternative buyers in the Latin American and Asian markets. The sanctions imposed on the Russian Federation and problems with logistics led to the fact that the prices for grain and fertilizers on the world markets went up. This trend is affecting a number of import-dependent countries.

7 patients for knocking in Taganrog were diagnosed with COVID-19

In the Taganrog temporary accommodation center on the street. Lenin needs volunteers