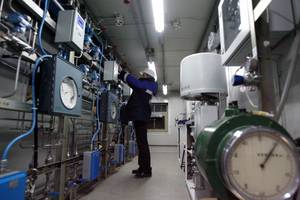 Gazprom supplies gas to European countries in transit through the territory of Ukraine in the amount of 50.6 million cubic meters. m through the gas measuring station (GIS) “Sudzha”.

This was announced by the official representative of “Gazprom” Sergey Kupriyanov, reports TASS. He clarified that the application for pumping through the GIS “Sokhranivka” was rejected by the Ukrainian side.

“Gazprom supplies Russian gas for transit through the territory of Ukraine in the amount confirmed by the Ukrainian side through the GIS Sudzha — 50.6 million cubic meters. m on May 12. The application for the GIS Sokhranovka was rejected, ”the agency quotes Kupriyanov. According to the estimates of the GTS Operator of Ukraine (OGTSU), the transit of Russian gas through Ukrainian territory on May 12 may fall by another quarter compared to yesterday’s figures. The day before, May 11, the volume of gas pumped was 72 million cubic meters. m.

On Tuesday, May 10, OGTSU announced that stops gas transit to Europe through Sokhranivka due to force majeure circumstances. The territory on which the station is located is no longer controlled by Kyiv.

Under a bilateral five-year contract dated December 30, 2019, Ukraine undertook to pump Russian gas to Europe annually through its GTS in the amount of 40 billion cubic meters (65 billion in 2020). The transit tariff – $2.64 per 1,000 cubic meters per 100 km – is three times higher than at Nord Stream 1. As a result, Kyiv planned to earn up to $7.2 billion from pumping Russian gas until 2024. Nord Stream 2 “Gazprom” had to agree with the “pump or pay” transit formula, which is unprofitable for itself: no matter how much gas is actually pumped through the Ukrainian GTS, one has to pay “for air”.

Create your stylish look in this season’s trendy colors

Another 36 people in Taganrog fell ill with coronavirus

Taganrog remains in the “yellow” zone for coronavirus

Basurin: Ukrainian Nazis are holding civilians as a shield at the direction of the West – ExpertRU