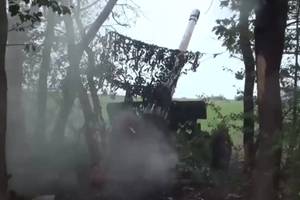 According to the Ministry of Defense of the Russian Federation, more than 650 Ukrainian military personnel were liquidated during the day as a result of Russian air strikes, missile forces and artillery.

This was announced during the morning briefing by the official representative of the Ministry of Defense, Igor Konashenkov.

“As a result of air, missile and artillery strikes, more than 650 nationalists, 17 tanks and other armored combat vehicles, three combat vehicles of Smerch multiple launch rocket systems, as well as 17 special vehicles were destroyed in a day,” he said.

The representative of the defense department noted that the Ukrainian army in the Donbass suffers heavy losses in manpower. He said that in the 34th battalion of the 57th motorized infantry brigade of the Armed Forces of Ukraine, which was defeated near the settlement of Mirnaya Dolina (LPR), the losses in two days amounted to more than 150 people killed, about 450 people were injured. “Junior command personnel abandoned their subordinates and deserted from the combat area,” Konashenkov said.

According to him, more than 170 soldiers and officers were evacuated from the combat area with severe injuries.

“Less than 50% of the personnel remained in the units of the 30th mechanized brigade of the Armed Forces of Ukraine near the settlement of Klinovoye in the Donetsk People’s Republic as a result of fire damage by the Russian Armed Forces,” said an official representative of the Russian Ministry of Defense.

According to him, three bases for the repair of armored vehicles, four command posts, manpower and military equipment in 18 districts were also hit by high-precision weapons of the Russian Aerospace Forces in the Nikolaev region during the day. In a number of areas, 21 Ukrainian unmanned aerial vehicles were destroyed, including over the Zmeiny Island.

News of the day: Denis Manturov considers the current policy of import substitution in Russia to be effective – Expert.RU

“Every mote is a vitamin”: loading bread in dirty gloves was caught on video

Sobyanin announced a “covid amnesty” in Moscow. News of the day in the world and Russia today