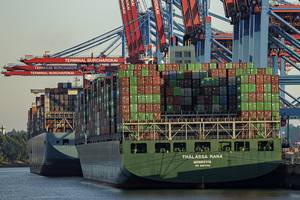 The first summer month will not be the most successful for the US and Eurozone economies – the development of both has slowed down sharply, according to a study by analysts and economists at S&P Global. Polls and statistics show, writes the Wall Street Journal, that the demand for their services and products has sharply weakened due to rising energy and food prices. This raises the risk of recession in many countries.

The gloomy outlook for the US economy and the euro area in the near future is evidenced by statistics on manufacturing and services. There are many reasons. This, of course, is high inflation, and, unfortunately, the persistent problems with supply chains that have become, unfortunately, habitual, and a decrease in investment in production due to the widespread increase in the discount rate by central banks. Europe, by the way, will face another serious test this winter – the energy crisis.

The Purchasing Managers’ Index (PMI), which is considered the main indicator of activity in both manufacturing and services, fell in the US in June to 51.2 from 53.6 in May. This is the lowest figure in the last five months. The readings of this index, exceeding 50 points, mean an increase in activity in the economy. If they are lower, then this indicates a recession.

No less serious decline in PMI in the euro area: from 54.8 in May to 51.9 in June. By the way, this is the lowest figure in 16 months.
Production in both the US and Europe declined for the first time in two years. The service sector has also cooled down sharply, which has warmed up sharply after the removal of covid restrictions.

The US economy will add less than 1% on an annualized basis in June, and in the third quarter it will decline altogether, said Chris Williamson, chief economist at S&P Global. In Europe, the June slowdown, he said, will be the sharpest since November 2008, which was the peak of the financial crisis. The number of new orders does not change, i.e. reached a plateau. This happened for the first time since last March, when the eurozone economy began to recover from the pandemic.

The authors of the study believe that even more serious trials and difficulties await the US and the eurozone ahead. Yes, companies still continue to hire new employees, but they seem to be doing it now more out of inertia than out of necessity. At least the numbers for new hires are the lowest in 13 months. At the same time, the prices that companies put on their products, according to the study, continue to rise sharply.


Signs of a sharp slowdown in the European economy appeared just a day after Fed chief Jerome Powell said that his institution’s fight against inflation could lead to a strong increase in the discount rate, which, in turn, could well provoke a recession.

The global economy is facing a whole series of serious problems this year, ranging from covid lockdowns in China to skyrocketing energy and food prices and the struggle of the central banks of many countries with inflation by raising the discount rate.

Economists at S&P Global lowered their outlook for the global economy on June 23. They believe that the US economy will grow by 2.2% this year and 1.1% next year. Their previous forecast was significantly better: 3.5% and 2.3% respectively.

For the Eurozone, they predict a recession as early as the fourth quarter of 2022 and the first quarter of 2023. The forecast for the whole next year is 0.5%. Meanwhile, the previous forecast was four times higher – 2.1%.

Perhaps the only ray of light in the gloomy future, S&P Global economists believe the removal of most covid restrictions in the eurozone, which allows us to count on a good tourist season this year. According to forecasts, it may be the best after 2019.

In the US, many households, due to the impossibility of resting during the pandemic as usual, have saved sufficient funds both on vacations and on trips to restaurants and other services. This could, in theory, allow them to partially offset the decline in purchasing power caused by the sharp rise in prices. However, numerous studies and polls show that Americans, frightened by the events in Ukraine, would rather save their savings for a rainy day.

News of the day: Large productions of the Maly Theater – Expert.RU