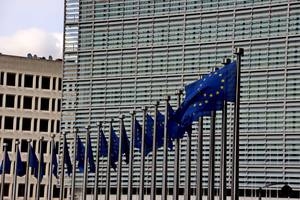 The European Union intends to offer Russian gas importers a solution that will avoid violating sanctions and at the same time satisfy the requirements of Russian President Vladimir Putin to pay for gas in rubles, writes Bloomberg. According to the source of the agency, the European Commission has prepared a new guideline on payments for Russian gas, which indicates that companies can open accounts in euros or dollars in Gazprombank, as required by the Russian authorities.

“The EU executive told governments in a closed meeting that the updated guidance will clarify that companies can open euro or dollar accounts with Gazprombank at the direction of the Kremlin,” a source familiar with the meeting said.

He also clarified that the new guidance on payments presented by the European Commission caused a mixed reaction within the EU. Thus, Germany, Hungary, Italy and France generally approved of the plan, while the representative of Poland said that he did not provide legal clarity and called for further discussion of this issue by the EU ambassadors. Some were also confused by the lack of specific instructions for opening accounts in rubles.

“The clock is ticking because many companies have a payment deadline at the end of this month and if they don’t pay, gas flows could be cut off. Poland and Bulgaria have already faced a reduction in their supplies due to non-compliance with Russian requirements,” the agency concludes.

Formerly “Expert” wrotethat the number of European buyers of Russian gas who are ready to pay for it in rubles in accordance with the requirements of the Russian authorities has increased to 20.

European countries have been trying for several weeks to decide how they can fulfill the condition of paying for Russian gas in rubles and not fall under the EU sanctions imposed after the start of the Russian special operation in Ukraine. By agreeing to the payment mechanism proposed by the Kremlin, Western European buyers may be afraid of violating EU restrictions, so Russia has taken steps to address such concerns. A Bloomberg interlocutor close to Gazprom said that the deal is actually completed as soon as the client deposits foreign currency into the account of Gazprombank. Further conversion into rubles occurs automatically and does not require the participation of the Bank of Russia, which is subject to EU sanctions.

competition of drawings on asphalt was held in Taganrog

Like sand through your fingers: where the sugar “leaks”