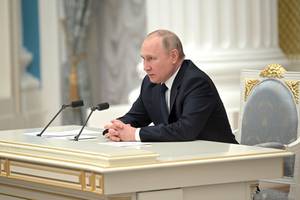 Russian President Vladimir Putin had a telephone conversation with Finnish President Sauli Niinistö. According to the Kremlin’s press service, the parties frankly exchanged views on the intention of the Scandinavian country to apply for membership in NATO. Putin called this decision erroneous, since “there are no threats to the security of Finland.”

“Vladimir Putin stressed that abandoning the traditional policy of military neutrality would be a mistake, since there are no threats to Finland’s security. Such a change in the country’s foreign policy may have a negative impact on Russian-Finnish relations, which for many years have been built in the spirit of good neighborliness and partnership cooperation, and have been mutually beneficial,” the press service said in a statement.

It is specified that the leaders also discussed the situation in Ukraine. At the same time, the President of the Russian Federation stated that the negotiation process between Russian and Ukrainian representatives was “actually suspended by Kyiv”, the Ukrainian authorities do not show interest in a “serious and constructive dialogue.”

Formerly “Expert” wrotethat NATO supports Ukraine, but is not going to become a party to the conflict. This was stated by Secretary General of the North Atlantic Alliance Jens Stoltenberg. He urged to do everything possible so that the conflict does not spread to other countries.

in Taganrog discussed the design code from Moscow designers

The house where you want to wake up