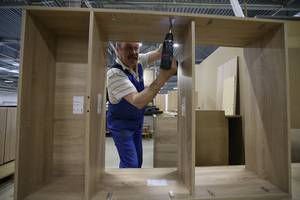 The Association of Furniture and Woodworking Enterprises of Russia (AMDPR) states that the main challenge for Russian furniture makers now is the urgent need to quickly solve problems with logistics, equipment and components.

It is largely possible to do this on our own, but if the general economic situation in the country worsens, the furniture industry may fall into a crisis without state support measures. These include a change in the criteria for standard housing: mandatory fine finishing followed by minimal furnishing of kitchens, bathrooms, hallways in new buildings.

The market is ruled by “economy” and “economy minus”

Against the backdrop of the withdrawal of Western companies from the market and sanctions pressure, the Russian furniture segment in the first quarter of the year showed an ambiguous development dynamics.

On the one hand, in monetary terms, it grew by 20% compared to the same period in 2021 and amounted to 79.6 billion rubles. This is a four year maximum. On the other hand, the quarterly volume of furniture production amounted to approximately 12.6 million standard units of production. This is only 4% more than in 2021.

If in February this indicator showed an increase of 15% compared to last year, then in March it was already a decrease of 3% from last year’s figures. Prices, on the contrary, jumped by 22% in March. This is due to the intensification of competition for each buyer.


Under such conditions, even such a furniture giant as IKEA, which staged a loud demarche in early March, is in no hurry to burn all the bridges. The company officially announced that they would continue to pay salaries to employees not until the end of May, as previously announced, but until the end of August. Perhaps longer. After all, otherwise it will be possible simply not to go back to the market.

“Three-quarters of the Russian furniture market are in the “economy” and “economy minus” segments. They generally determine the entire Russian market. Accordingly, the competition here will be the most acute. If we talk about the types of furniture, then traditionally increased competition is observed in cabinet household furniture, upholstered furniture and kitchens. These types of furniture are bought most often and have the largest share,” Alexander Shestakov, general director of the First Furniture Factory, president of the AMDPR, told Expert.

At the same time, new supply chains are already being built on the market. Russian enterprises began to engage in such work from the beginning of March. According to Alexander Shestakov, the greatest problems are observed with paintwork materials and finishes (for example, PVC edging). These goods were purchased in Europe, and it is difficult to quickly replace such a volume in the Chinese or Turkish market.

Another difficulty lies not even in furniture fittings, the temporary shortage of which was most expected, but in spare parts for machines on which furniture is made.


“Our enterprises are accustomed to European production lines, despite the fact that Chinese equipment manufacturers have been increasing their share of the Russian market in recent years. The lack of spare parts for eurolines can be a serious problem for the furniture industry, but only when it comes to electronics. Ordinary parts are capable of being manufactured by domestic machine tool builders,” said Alexander Shestakov.

He clarified that in order to use the new fittings, it is necessary to carry out a number of technological changes in production. This business is not too fast and involves the reconfiguration of equipment: new components are purchased that allow parts to be installed on lines, and nodes are also changed.

“There is a reorientation to the East. Even in previous years, ties were established with factories in China and Turkey, so there was no complete dependence on Europe. Now cooperation is strengthening and deliveries are growing. But, as in the case of fittings, there is no way to quickly fix the situation with the same chemistry. For example, the isocyanate market in the world is monopolized, so during the shutdown of one plant during the pandemic, everyone without exception faced difficulties,” Alexander Shestakov believes.

Russian furniture will be taken to Asia

Due to current changes in the market, Russian furniture companies have begun to use updated marketing tools. Now more attention is paid to traditional, if not banal, ways of promoting products, rather than aggressive or extravagant advertising. It is this approach that turns out to be effective.


“The first tool is the price, it has always played a big role in choosing furniture. In the current situation, complex furnishing of new buildings, which are now offered by both furniture companies and developers, will become even more profitable for the end user. The second tool is the reputation and reliability of the manufacturer. The consumer will more often pay attention to the brand and history of the manufacturer, because. this guarantees the end customer the quality of the materials from which these pieces of furniture will be made. Large manufacturers use only high-quality boards and reliable fittings – this furniture will serve the buyer for a long time,” assured the general director of the First Furniture Factory.

At the same time, Russian furniture makers, noting increased competition within the country, are considering the possibility of entering foreign markets, which, among other things, is facilitated by the current process of building new logistics with non-CIS countries.

“Uzbekistan, Kazakhstan, Iran, as well as the countries of the Middle East – these are the markets that enterprises that have lost sales in European countries are looking at. In terms of volume, these markets are comparable to European ones, but the competition among furniture makers in these countries is lower. Here our furniture makers will be able to use their main trump card – the ratio of prices and quality of our furniture products. The Indian market is also promising, but entering it is not yet profitable. For a long time there has been a discussion that there are no relevant trade agreements between Russia and India, so furniture makers are faced with a high import duty, which reaches 30%,” said Alexander Shestakov.

Speaking about the general prospects of the domestic furniture market, the expert warned that there are two scenarios. If the pessimistic scenario is realized, the industry will collapse. As they say, the larger the cabinet, the louder it falls. Both small and large producers will suffer. The optimistic scenario may include government intervention and cooperation with one of the “locomotives” of the economy – the construction industry. Figuratively speaking, the furniture maker is asking not for a fish, but for a fishing rod.


“In the worst case, we are waiting for a decrease in demand by at least 50% due to a reduction in household incomes and high inflation. The population will simply become insolvent, which will hit the furniture industry. But this can be avoided if there are changes in the criteria for standard housing. The inclusion of mandatory minimum furnishing will have a significant impact on the industry and ensure that businesses operate as usual. Otherwise, it will be quite difficult for furniture manufacturers to withstand such a fall,” Alexander Shestakov warned.

“In general, we look to the future with optimism – our enterprises will emerge from this crisis stronger and less dependent on imports. The current situation will allow us to replace imports of everything that can be imported, and learn how to produce those parts and components that we were too lazy to produce before. We will be more mobile and will be less dependent on a particular market, both in terms of supplies and in terms of marketing our products,” concluded the head of the industry association.

Who-who? “Horse in a coat” in Taganrog

“Notebook Taganrog” congratulates all workers on the holiday

News: The ruble sank today, but will continue to gain strength – Expert