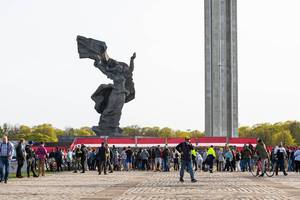 The Saeima of Latvia voted for amendments that allow the demolition of the monument to the Liberators of Riga.

As RIA Novosti reports with reference to local media, the deputies of the Latvian parliament urgently approved a bill that terminates the article of the Latvian-Russian agreement on the preservation of memorial structures.

Thus, in the first and final reading, the Seimas suspended Article 13 of the agreement with the Russian Federation of 1994, which allows creating a legal basis for dismantling the monument to the soldiers-liberators in the park of Riga. 70 deputies voted for it, 18 voted against, there were no abstentions.

Recall that on the eve of Victory Day, the Latvian authorities staged a powerful anti-Russian campaign, which had the opposite effect. On May 9, a huge number of people with flowers came to the monument to the Liberators of Riga. Early in the morning of May 10, the authorities of the Latvian capital decided to rake the brought bouquets with a tractor.

Outraged by this, the inhabitants of Riga again came to the monument on May 11 and brought even more flowers, they also lit candles. The police arrived at the monument and detained several people. And on May 12, the deputies of the Seimas who urgently gathered for a plenary session adopted this scandalous decision, which will almost certainly escalate the situation in the republic even more.

According to Russian Ambassador to Riga Mikhail Vanin, the Latvian authorities “were frightened by the scale of support, the scale of gratitude of the inhabitants of Riga to the soldiers-liberators.” At the same time, he recalled that the demolition of Soviet monuments is contrary to the agreement between the governments of the Russian Federation and Latvia on the issues of social protection of Russian military pensioners and members of their families living in Latvia, dated April 30, 1994.

As you know, article 13 of the document states that “taking into account international practice, the Latvian side ensures the care, improvement and preservation of memorial structures and places of mass graves of soldiers on the territory of the Republic of Latvia.”

In Taganrog, the reconstruction of the central alley in the Dubki grove is underway