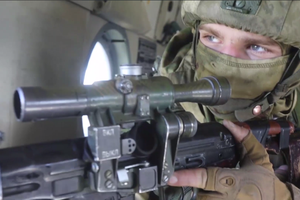 Over the past night, high-precision air-based missiles of the Russian Aerospace Forces hit two command posts, 11 company strongholds and four depots of missile and artillery weapons and ammunition of the Armed Forces of Ukraine in the settlements of the DPR. In addition, two S-300 air defense missile launchers and a radar post were destroyed in the Sumy region of Ukraine, Major General Igor Konashenkov, spokesman for the Russian Defense Ministry, said.

In addition, according to him, Russian air defense systems shot down 15 Ukrainian drones in the areas of the settlements of the DPR, LPR, Kharkiv region and over Zmeiny Island, in the area of ​​​​the village of Stepnoye, Kherson region, a Tochka-U tactical missile was intercepted, and in Kharkiv and Kherson region intercepted 11 rockets of the Smerch multiple launch rocket system.

“In total, since the beginning of the special military operation, the following have been destroyed: 165 aircraft, 125 helicopters, 879 unmanned aerial vehicles, 306 anti-aircraft missile systems, 3,098 tanks and other armored combat vehicles, 381 installations of multiple launch rocket systems, 1,525 field artillery guns and mortars, as well as 2,934 units of special military vehicles,” the representative of the Ministry of Defense specified.

Formerly “Expert” wrotethat on the eve of high-precision air-based missiles of the Russian Aerospace Forces, five command posts and two ammunition depots in the areas of the settlements of Disputed and Berestovoe of the DPR were hit, up to 100 nationalists were destroyed, and 23 units of military equipment were disabled. Operational-tactical and army aviation defeated 43 areas of concentration of manpower and military equipment.