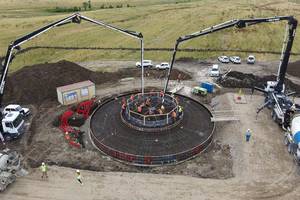 The construction of the Kuzminskaya wind farm has started in the Stavropol Territory.

This was reported by the press service of JSC “Novawind” – the wind energy division of the state corporation “Rosatom”.

“The first foundation was poured at the construction site of the Kuzminskaya wind farm in the Stavropol Territory,” the report says.

It is specified that 64 wind turbines with a capacity of 2.5 MW each will be placed at the facility. The total capacity of the station will be 160 MW, the planned average annual output is 378 million kWh.

More than 100 units of construction equipment and more than 250 workers and engineering specialists are involved in the implementation of the project.

Novawind JSC was established in September 2017, by now the company has launched 720 MW of wind power capacities. In total, by 2027, Rosatom plans to put into operation wind power plants with a total capacity of about 1.7 GW.

Viktor Svistunov, General Director of Novavind JSC, stated at the St. Petersburg International Economic Forum that the current level of localization of the stations being built by the company is 68%, TASS notes.

News: Bitcoin will try to form an uptrend – Expert

Bankruptcy moratorium: no exceptions yet – ExpertRU