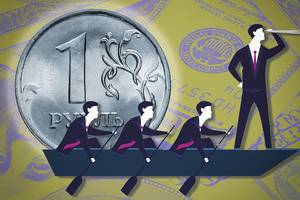 So, the growth of the ruble continued. As a result of the day, the “Russian” strengthened against the dollar by 5.8%, closing the auction at a quote of 63.3 rubles. The last time the ruble was at this price was in February 2020.

Today, currency speculators have joined the growth of the ruble, and exporters, judging by the course of trading, have increased the sale of foreign exchange earnings. The attempts of the former to play on the depreciation of the ruble, and the latter to hold back foreign exchange earnings in anticipation of the cessation of gas supplies to Europe, failed.

Bloomberg reported that 20 European companies have opened accounts with Gazprombank to pay for gas in rubles, and another 14 have requested the necessary documents. Thus, the majority of European large consumers of Russian gas have decided in good faith to execute the decree of the President of the Russian Federation. This means that there is no talk of reducing the inflow of foreign currency into the country as a result of stopping gas supplies.

It is possible that part of the gas payments today just entered the currency market of the Moscow Exchange, which supported the ruble.

At the same time, the price of spot gas at European hubs has grown today by more than 10% – including due to the fact that, in accordance with the counter-sanctions of the Russian government, Gazprom can no longer pump gas through Poland.


From the point of view of technical analysis, the dollar-ruble pair is at the support level. But you should not rely on the fact that the area of ​​63-63.5 rubles per dollar will stand and will not be broken down, since now the market is ruled not by currency speculators, but by real sellers of currency – exporters. The latter will soon have to pay taxes to the budget, in anticipation of which they can start accumulating rubles in advance, fearing that in the future the ruble will cost even more.

So far, the first goal of strengthening the ruble is the “round” mark of 60 rubles. per dollar. It is possible that as it approaches it, the Bank of Russia will begin to soften the measures of foreign exchange and export control — in particular, it will reduce the rate of sale of mandatory foreign exchange earnings.

But this will stop the growth of the ruble only for a while. Now dollars and euros are moderately toxic assets due to the risks of their “freezing”. At the same time, the exporters themselves do not particularly need the currency due to the fact that, due to sanctions, they practically cannot purchase equipment for further development.

It is also worth noting that the ruble, as in previous days, ignores the negative external background in the form of falling raw materials, European and American stock indices.


Quite the opposite is the situation on the stock market, which fell by 3.7% today. There are no reasons to buy Russian stocks, the long-term trend in the Moscow Exchange Index remains downward. Therefore, investors took advantage of global pessimism to reduce positions in shares.

Oil traded in the red for most of the day amid fears of a global economic recession that are beginning to outweigh geopolitical risks. But since lunch, the quotes of “black gold” have turned up from the mark of $105 per barrel and in the evening went to the area of ​​yesterday’s close.

Despite this, Russian oil companies sold worse than the market. Investors were frightened by the forecasts of the International Energy Agency, according to which, in the second half of the year, Russia will reduce production by 3 million barrels per day from 9.1 million barrels in April. At the same time, the Agency believes that the United States and Arab countries can replace these volumes in the world market.


Perhaps now is a good moment to buy oil shares in the long term. Analysts of Freedom Finance Investment Company, in particular, believe that a new package of anti-Russian sanctions will soon be agreed upon, as a result of which world oil prices will rise to $120 per barrel.

The leaders of growth with a result of +3.2% were shares of Akron today, in which, quite possibly, a new uptrend begins. The growth driver of paper is the shortage of fertilizers in the world and forecasts for their rise in price by 70% this year.

News: Capital multiplications: economists predict the growth of the role of development institutions when the investment cycle is restarted – Expert