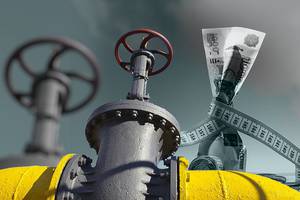 The situation on foreign exchanges and in the field of politics continues to deteriorate, which puts pressure on Russian stocks, but is completely ignored by the ruble.

The House of Representatives of the US Congress, in particular, approved a number of bills aimed at further tightening sanctions and economic isolation of Russia.

Western stock exchanges turned red: American futures are falling, commodity assets (including oil), the dollar is rising against the dual-currency basket. World markets have come to understand that the slight slowdown in inflation in the US in April was largely due to a decrease in gasoline prices. However, already in the first ten days of May, fuel prices in the United States set a new record, which promises an increase in the cost of other products.

“The main contribution to the slowdown in inflation was made by the decline in gasoline prices (-6.1% m/m), but at the same time, high rates of growth in food prices remain (in annual terms, food inflation reached its maximum since April 1981). But now the price of gasoline in the US has updated a record of $4.37 per gallon. It is also important that the most stable component — core monthly inflation (excluding energy and food prices) accelerated growth from 0.3% m/m in March to 0.6% m/m,” — Olga Belenkaya, head of the department of macroeconomic analysis of FG Finam, comments on the situation.

To combat inflation, the US Federal Reserve will be forced to rapidly raise interest rates and reduce its own balance sheet, thereby slowing down economic growth.


Therefore, it is not surprising that the Russian stock market also started the day with a decline: the loss of the Moscow Exchange Index in the first hour of trading reached 1.5%. Lukoil is trading much worse than the market, with losses of over 3% of capitalization, as well as receipts from TCS Group, the parent company of Tinkoff Group, which look strongly oversold in the medium term.

And the reasons for changing the downtrend in the stock market are not yet visible.

The ruble started the day neutrally, but very quickly turned to growth on the sale of foreign currency by exporters. During the first hour of trading, the “Russian” won back about 2% from the “American”. A piece of paper with a portrait of George Washington on the Moscow Exchange costs less than 66 rubles.

“The recent strengthening of the ruble is largely due to the lower volume of imports amid sanctions and restrictions by foreign companies on the supply of goods to Russia and, as a result, lower importers’ demand for foreign currency,” — noted the Bank of Russia in its report.


This is partly true, as Russia’s trade surplus promises to be a record this year, and as long as the supply of currency in the market exceeds demand, the ruble will continue to strengthen.

But no less important reason for the growth of the Russian currency is the temporary abolition of the budget rule, according to which the “surplus” of oil and gas revenues was previously taken out of the economy and sent to the National Wealth Fund, a significant part of which was subsequently “frozen”, and, according to our politicians, was simply stolen by the West .

But now the budget rule does not work, and it is hardly worth expecting a quick recovery in imports. Therefore, the dynamics of the ruble exchange rate will depend on the volume of foreign exchange inflow into the country, and the volume of gas supplies to Europe will play a significant role here.

Information on this issue comes in different directions. Thus, Italian Prime Minister Mario Draghi said that Germany had already paid for Russian gas in rubles. If this is true, then the rest of Europe will also switch to “gas for rubles” or will buy gas from Germany, which is still paid in rubles.


On the other hand, yesterday the Russian government approved a list of Western gas traders with whom it is forbidden to make any transactions. It is not yet clear how this will affect the volume of gas supplies to the EU. Anyway, this morning spot gas prices in Europe rose by more than 10%. A thousand cubic meters of gas costs about $1,130.

Analysts again started talking about reducing the key rate of the Bank of Russia, expecting that the regulator will lower the rate by 1-2 percentage points at the June 10 meeting. Such thoughts are prompted by the need to stimulate the economy and the decrease in weekly inflation from April 30 to May 6 from 0.21% to 0.12% n / n, which corresponds to about 18% on an annualized basis. But any decision of the Central Bank on the rate will not affect the ruble exchange rate.

In the meantime, in the short term, the ruble has a very good chance of continuing its growth, which next week will be stimulated by the approaching deadlines for companies with the budget for taxes and mandatory payments.

“In the tax period, if the external background and the political situation do not worsen, we may well see the dollar at 60 rubles,” — believes Alora’s chief analyst Alexei Antonov.

Siberia got a taste of electric cars thanks to En+