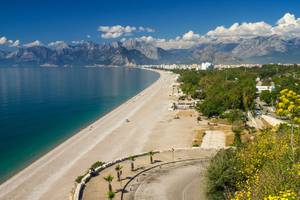 Prices for tours abroad and in Russia in the upcoming summer season increased by one and a half times compared to last year. Thus, the average check to Turkey increased from 104 to 157 thousand rubles, and in Russia – from 51 to 72 thousand rubles. It is reported by RIA Novosti with reference to the data of the online service Travelata.ru.

“Prices for tours have risen significantly. If last year the average check for a trip to a Turkish resort was just over 100 thousand rubles, then this season it is more than 157 thousand. This applies to almost all areas – the average check has increased by 1.5 times. The main reason is the increase in the cost of air tickets,” said Oleg Kozyrev, Marketing Director of the service.

This year, Russian resorts are leading in terms of the number of bookings for summer tours. Slightly more than half of travelers (51%) plan to have a rest inside the country, Turkey is in second place, 33% of Russian tourists are going to go there, tours to Abkhazia are in third place in demand, they were chosen by 7% of travelers, and the average check there was 79, 6 thousand rubles. In fourth place is Egypt (4% of tourists with an average check of 138 thousand rubles), in fifth is the United Arab Emirates (2% of Russians with an average check of 150 thousand rubles). Last year, the top five included Turkey, Russia, Cyprus, Egypt and Abkhazia.

According to the booking service, the cheapest tour in Russia this year cost 8.3 thousand rubles. It was purchased from Moscow to St. Petersburg for three nights per adult in a hostel without meals. A similar tour last year cost about 5 thousand rubles. The most expensive tour from Moscow was bought for this summer to Turkey. For 797.6 thousand rubles, two adults and three children will spend 22 nights in a five-star hotel in Alanya with an ultra all-inclusive food system.

Formerly “Expert” wrotethat hotels in the Crimea in the upcoming summer season are experiencing problems with loading, on average, it does not exceed 40%. In addition, mass cancellations of bookings for May and June are recorded against the backdrop of information about the cancellation of flights. Alexei Volkov, President of the National Union of the Hospitality Industry, spoke about this. He believes that this season “will be very weak” and suggested that the government subsidize holidays in Crimea for employees of state corporations and state-owned companies in order to support the region’s tourism industry.

Excursion “Without a statute of limitations” was held in Taganrog

benefits of swan down blankets

The head of South Ossetia, Bibilov, called joining the Russian Federation a strategic goal of the country. News of the day in the world and Russia today