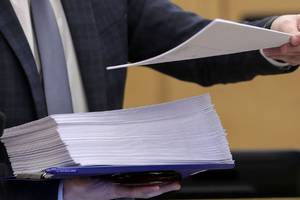 Initiatives aimed at protecting citizens and the economy of the Russian Federation are a priority agenda of the State Duma. The bills have already been submitted to the lower house of parliament and will be considered in the spring session, State Duma Speaker Vyacheslav Volodin said in his Telegram channel. He also invited subscribers to share their suggestions.

“I would like to separately note the draft law on the external management of foreign companies that have announced their withdrawal from our market. The measure will help save jobs. External management can be appointed by a court decision,” Volodin wrote.

The speaker highlighted another important bill, which provides for an increase in budget places for master’s programs in 2022.

In addition, the State Duma will consider an initiative on the protection of personal data, which provides for the possibility of interference by Russian services in the processing of data of Russian citizens in other countries. It is also planned to adopt laws on a prompt response to the ban on Russian media abroad, on simplified obtaining a residence permit for IT specialists from other countries, on supporting lessees – companies will be able to buy vehicles and equipment ahead of schedule without penalties for early termination of the contract. It is also planned to make changes to the concept of “compatriots abroad”, in particular, the connection with the citizenship of the USSR will be excluded, the period of reduced tax rates will be extended until January 1, 2024, and treasury support of contracts will be simplified.

how wrote “Expert” earlier, the United States acknowledged that anti-Russian sanctions have not yet given the effect that they were counting on in the West. In particular, Russian shipping and cargo transportation did not suffer from the restrictions. For example, Russia’s trade with China and Japan has generally remained stable, while the number of bulk carriers bound for South Korea, Egypt and Turkey has increased.

“Sinara” violates the law on silence in Taganrog

Taganrog municipality demolished illegal garages, but left rubbish and pits in their place

An ammunition depot caught fire in the Belgorod region. News of the day in the world and Russia today